Go Travel Tajikistan - all the most interesting about Tajikistan
10.01.2020 admin 5719Views 0Comments 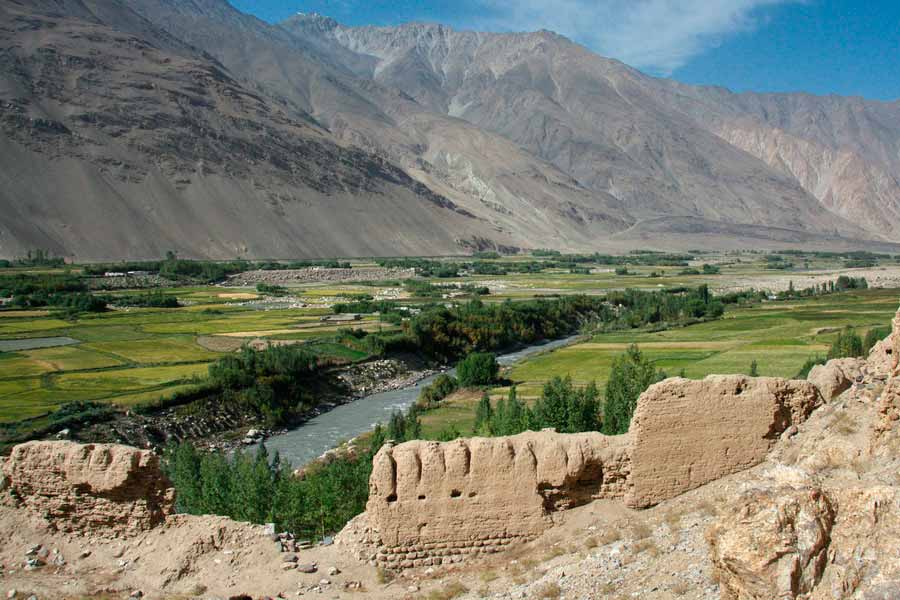 Not far from the village of Ishkashim is one of the ancient attractions of the Pamirs and, in particular, the Vakhan corridor-the Fortress of Kakh-Kakha, which is also called Kaakhka. It rises above the Panj river, built on a huge natural rock measuring 700×220 meters. As a defensive structure, this fortress existed from the II century BC, and up to the VII century ad.

Today, the ruins of the huge Fortress remain, but they show that once it was a serious fortification. It is located right on the right Bank of the Panj river, which protects the South side. Kah-Kah is built on a separate standing massive rock height of more than ten meters, which added defenses, but for better protection were erected walls and 56 towers, most of which were located on the Eastern and Western sides of the elongated Fortress. The gate was on the North side. Inside the Fortress was an even more elevated citadel, which had its own walls, which is one of the distinctive features. Thus, Kah-Kah was a Fortress with a Fortress inside.

The unusual name of this Fortress is often tried to explain as follows: once there was a Prince with the name Kaakh, or Kakah, and it got its name in honor of him. But at the same time there is another opinion: that “Kakh” in one of the ancient languages meant a Fortress (for example, in the Turkic languages the Fortress is designated by the word “Kala”), and since this Fortress consists of a Fortress within a fortress, then the name “Kakh-Kakha” turned out.

On the basis of archaeological excavations it was determined that the Fortress was built in the II century BC. Thus it turns out that it was built in the era of the Kushan Empire, when the great silk road was in its heyday. Perhaps precisely thanks to this trade path and emerged Fortress Kakh-Kakha, and its purpose was in protecting caravans, – reaching on Vakhanskomu corridor from China in Afghanistan and India. The decline of the Fortress coincides with the time of the arrival of the Arabs in Central Asia, that is, the VII century. Today, Kakh-Kakha is a historical landmark on the Pamir highway, and its Eastern part is used as a border post, where a detachment of Tajik troops controls the border with Afghanistan. Entrance and photography in this part of the Fortress is prohibited.